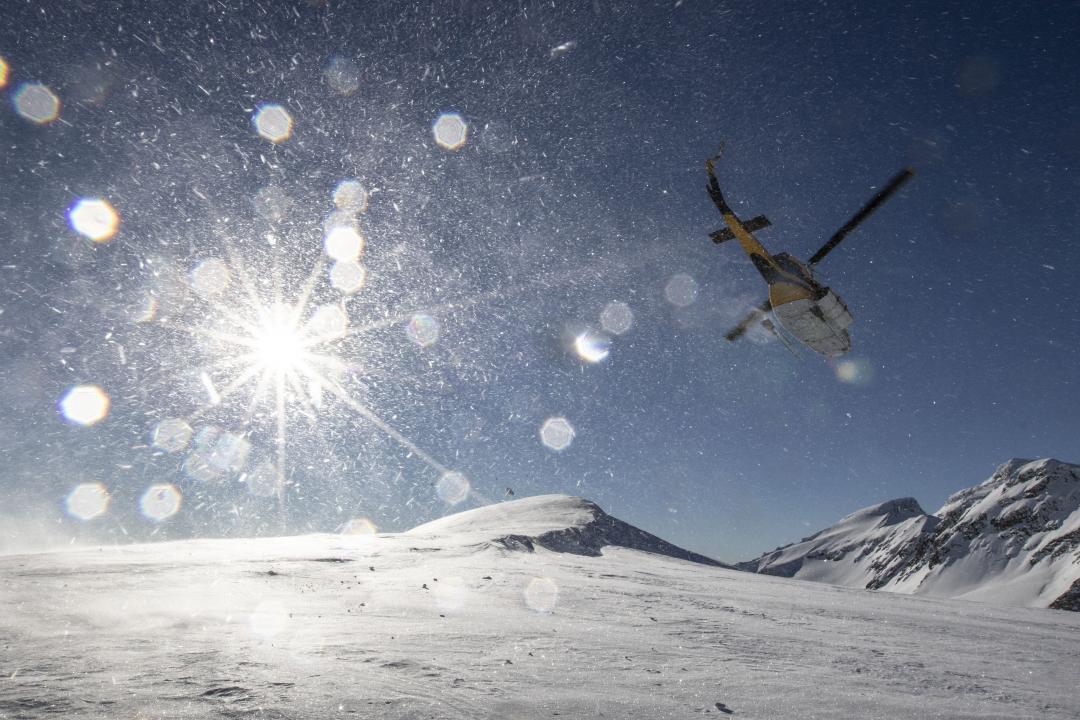 Beat Steuri has accumulated over 22,500 flying hours in 39 years, during which he spent 31 winters flying heli-skiers. However, at the end of the 2018-19 season, he will hang up his helmet and retire from his position as Job Manager at Yellowhead Helicopters and Mike Wiegele Heli-Skiing. His wisdom for these mountains has been passed on through numerous safety techniques and guiding procedures, but his confident, warm smile in the helicopter next season will be greatly missed.

At Mike Wiegele Helicopter Skiing, Beat is responsible for working hand in hand with guides and pilots to ensure everyone’s safety.

During the winter season, every morning before the sun rises in Blue River, Beat checks the weather while he eats his breakfast. He checks for fronts coming toward town, if the weather will be improving or deteriorating, the temperatures and winds at higher altitudes and possibilities of freezing rain.

Each day, he attends the morning guide meeting to make plans for the day based on guests, conditions and more before heading to the hanger for daily aircraft inspection.

Beat hasn’t always spent his days high above the Cariboo, Monashee and Rocky Mountain ranges. As a child and grandson of a mountain guide, he spent years watching climbers push their limits on the Eiger and surrounding mountains in his home town of Grindelwald, Switzerland. He was inspired by the helicopter pilots who rescued those who got in to trouble on the iconic Eiger mountain.

“It leaves an impression. I was always fascinated by helicopters and the difficult rescues, but it was just a dream,” he said.

Instead of chasing what seemed unattainable, Beat completed an apprenticeship as a tool and die maker and diligently trained on the side to become a mountain guide. To pass the final exam he needed to learn a second language and therefore, was heading to Canada.

“After one year, I went back home and successfully finished earning the mountain guide diploma. That opened the door for me to come back and work as a helicopter-ski guide…as I was leaving Switzerland my brother-in-law said, ‘You should be a helicopter pilot’ and that’s the first time I thought about checking it out.”

“So, I returned to Canada with my then girlfriend, now wife (Therese Steuri) and promised to go back to Switzerland someday.”

As a heli-ski guide in B.C. he met many pilots and decided to proceed with the training and soon found employment. After seven years of learning the skills of flying it was now time to go back to Switzerland.

One of his duties was rescuing injured and stranded climbers in the mountains that towered over him as a young boy.

“It felt amazing to achieve my boyhood dream and to be flying into the mountains where I grew up.”

Beat, his wife and their two daughters, moved back to Canada in 1988, where he finally fulfilled his dream of working as a helicopter-ski pilot. “It’s one of the hardest jobs,” he said, “even compared to mountain rescue and construction work.”

“When flying in adverse winter weather, there are no colours. It’s all black and white. When you approach a landing all you see is two flags, like two lines on the windshield. That’s the reference from which you have to judge the height, the speed and the approach angle. On the snow below, you see no indication of the helicopter’s movement. Now you have to bring those flags closer and closer to the helicopter till they end up beside the ski basket. If the approach speed in the last 30 yards is too slow, the powder snow will show you what a white out is. If you’re going too fast the helicopter will end up on a place where you don’t want to be. Finding your way around in the mountains in low visibility conditions is not easy. The GPS usually doesn’t help much. It will point straight through a mountain, but you have to know the way around the mountain following the valleys.”

“With my experience as a guide, when I’m flying around I see lot of terrain and new lines and runs I’d like to ski. This information I share with the guides.”

Beat has found countless pickup spots over the years, like the center pick up on Diamond Head which opened up a lot more terrain, Beat’s Wall, Aloha trees, Tighty Whitey and runs like Beat’s Basin, B&B (Bill & Beat’s Basin) and Beat’s Home Run, which is his favourite.

In addition to runs and pickups, Beat dedicated his time to improve safety and efficiency at the resort. His skills extended to computer programming where he wrote multiple computer programs for various needs. One tracks all helicopters for MW dispatch tracks wildlife closures and a message system where a guide or pilot can report any concerns during the day. “It was quite a big project, but it makes work really easy for the dispatchers.”

Beat also redesigned the MWHS booking and grouping programs for a better overview and simpler usage. He constructed the grouping sheet, where guides import the guest’s names, sort them into groups, inserts templates for the various helicopters and then the program sends out automatic emails to various departments. Another program he developed, keeps track of all guests’ weekly vertical footage. It used to take about two to three days per week for one person, but now with the program it takes one hour to do the work.

He still loves flying every day but is looking forward to spending more time with his wife rock climbing, skiing, hiking, canoeing, traveling with his classic 1970s motor home and most of all spending time with his five young grandkids.

“I will miss the guides, my friends and the smiles from the guests after an epic ski day… so long Blue River.”

Beat is a well-loved member of the extended Wiegele family. The entire team at Wiegele World wishes him much happiness and powder skiing of course in his well-deserved retirement.